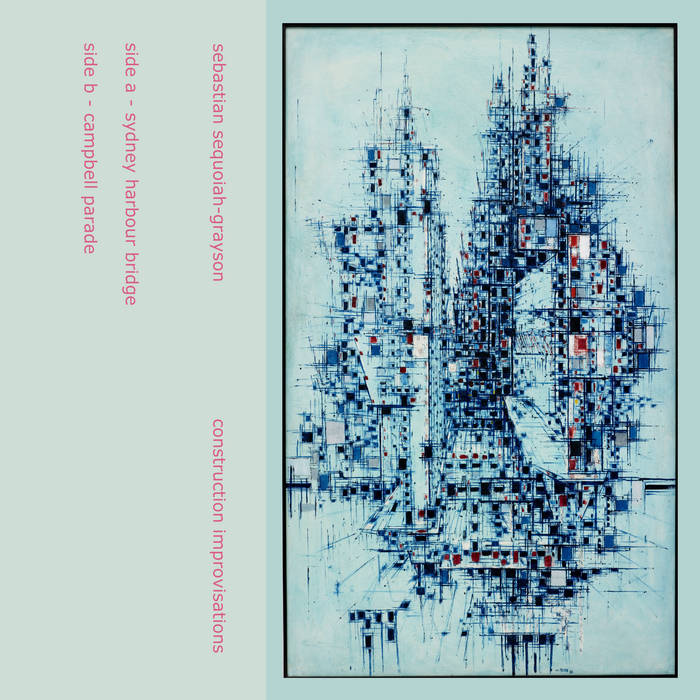 damian___b There's a beautiful irony in that the music is drawn from stark, steely reality yet is soft, transportative and memory-laden in fabric. Favorite track: campbell parade.

A dash for the moment. I took a guitar and field recorder underneath the North end of the bridge with my brother Chris. We watched the harbour. That harbour that caught Olsen, Rose, Whitely, and so many others. I sat, tuned, hit record, and just played. The sounds raining from the overhead trains - shards of gnosis from an alien technology, shattering off the ground into that vast and ancient space of sapphires and emeralds. The key, on this day, to not think about it - to give ourselves to the architectures of the form. If I had taken time to organise things properly, as they say, then it would have been a disaster. Sometimes imposing oneself creates intricacies, but in this case sublimation was its own device. Chris was so lost in the moment towards the end that he broke a large stick over the handrail, like a shaman calling out understanding until it turns to blood. God knows what anyone walking past must have thought, if they noticed. We were gone within less than half an hour from when we had arrived. Press the eject and give me the sky.

I started with a field recording of the roadworks that were keeping us up all through night during the lockdown. I walked with a shotgun mic, recorder, and headphones, trying to capture the best objects that I could could find. Hunting for sonic opals at midnight. Afterwards I listened to the field recording and tuned my guitar by ear to the resonant frequencies of the roadworks. I have a small steel rod that works well for prepared guitar, so I recorded a layer whilst listening to the field recording and treating it as the other half of a duo. Then I listened to these two layers together whilst playing sparsely. Now we are a trio you see? Then I listened to all three layers whilst playing a feedback drone by rocking my guitar back and forth across the top of my amp via a little old Prescription Electronics experience-fuzz that I have had for around 25 years. And the quartet has arrived. This damaged my guitar but it was worth it I think. The guitar parts were all tracked with multiple mics into separate channels, and every track was engineered independently, delicately, and very carefully. God, this took me over a month, working on it all night every single night, into the edge of dawn. There were so many layers of sound. I took to this block with a scalpel and cut and peeled and chiseled and filed and sanded and polished until its form was exposed. Campbell Parade nearly killed me. There is no rearrangement of any of the layers at all. Everything that you hear is heard exactly when it was played, and what you hear is what I heard when I was playing it. I know that it sounds like bullshit when I say this, but Campbell Parade is a jam.

Sebastian Sequoiah-Grayson - guitars on Side A and Side B.
Christopher Grayson - handrail on Side B.

Side A - Recorded live underneath the North end of Sydney Harbour Bridge.

Mixed by Sebastian Sequoiah-Grayson at Blanket Fort.
Mastered by Joe Talia in Tokyo.

I play fingerstyle noise guitar. You can listen to some more of it here:

Bandcamp Daily  your guide to the world of Bandcamp